Museum tickets, service costs:
Madách Imre was born in January 1823 in Alsósztregova and died therein 1864. He persued his studies in Vác and Pest, then in 1840 he returned to Nógrád. He first became a notary assistant under the supervision of István Sréter, deputy lieutenant of Nógrád. As a brave regional speaker of the opposition party, he soon became known in the political life of the county. In 1844 he became a judge of the Court of Appeal, but - because of his desease - he resigned in 1848. 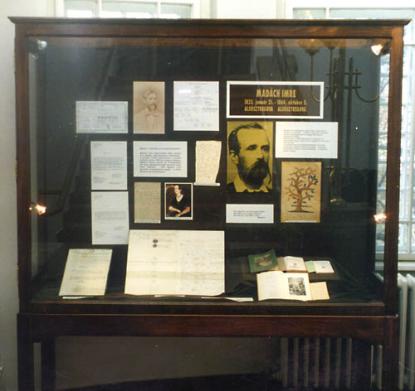 He married Erzsébet Fráter in 1845. In the quitness of the family manson house in Csesztve he spent six wonderful years together with his wife. After th edefeat of Hungarian Revolution he was imprisonned for his rebllious deeds. Whilst he was in prison his wife committed adultery. Madách divorced her and moved to his mother together with his children.

The legacy seen on the exhibition was written (dictated and sight by himself) one day before his death, on 4th October 1864. The testament was left to his grandchild called Flóra Madách, whos daughter - living in Brasil - gifted the highly valued writing to the Palóc Museum.