Museum tickets, service costs:
The exhibition gives a universal picture about the slow change to the modern developed and capitalized production methods. The reason for the slowness can be found in the lack of financies as well as the limitative affect of the conscious Austrian industrial policy. That is why the leading figures of the reform era made it their principal task to do away with the industrial underdevelopment. Through the enthusiastic work of Lajos Kossuth the Industry Union was established in 1842. The same year The First Hungarian Industrial Exhibition was arranged. Kossuth also organized the Factory Founder Society, the first vice-president of which was earl István Széchenyi. 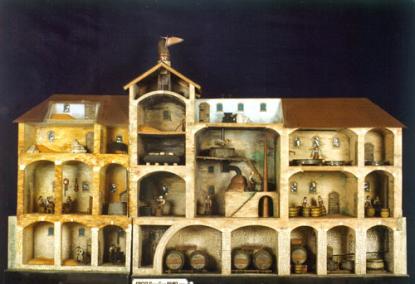 The chemical industries were producing in the same way as in the previous century, albeit the number of factories multiplied. The roof tile and the porcelain manufacturing was also developed at this time.

The earliest formented drink of our nation was the beer. Beer making techniques were broughtto our region by the first Hun settleres. However, its industrial production only began in the 19th century.

The naval blockade caused by the Napoleonic wars turned the attention to the importance of sugar production. In our country it was Sámuel Tessedik who first made sugar and syrups from sugar-beet.

The textile painting and blue printing technique was also introduced at this time. The gigantic Goldberger Textile Factory developed from one of the many Hungarian blue print work shops.

The first New Year's Eve of the 19th century was celebrated by the side of candles and lampions in our country, but more and more demands were raised for a more up-to-date solution. István Széchenyi, returning from his journey to England, made a "gas cooker device" for the supply of his palace in Nagycenk. In 1837 the National Theatre was also equipped by a local gas supplier system.

The exhibition represents the prehistoric instruments of fire-making, too.