The exhibition shows the history of spice paprika powder from the very first appearance of red pepper in Szeged through the stages of development in processing. Thanks to Columbus' travels, the plant arrived in Hungary in the second half of the 16th century, the first note mentioning red pepper in Szeged dates back to 1748. In the beginning it was kept as an ornamental plant, later its useful physiological effects were recognised and it was used as a medicine to cure rheumatic illnesses and ague. Then, in almost a hundred years, more and more people started to cultivate the plant as a herb. 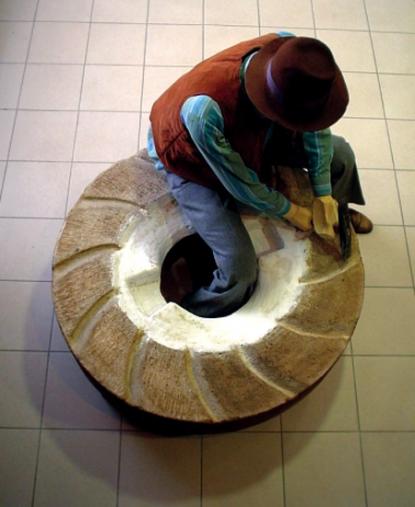 Nowadays, 250 years after our first written record, the Szeged paprika powder is widely known and sold almost all over the world. This noteworthy result is the outcome of several important factors. One of them is the plant itself, which has been bred trough decade-long selections, with the colour, the taste and the aroma in its genes. Another factor is the soil. Red pepper likes the special soil by the River Tisza, Which is abundant along the riverside. The third factor is sunshine: the amount of sunny hours around Szeged exceeds 2000 hours/year. The fourth factor may be (Boards 2-13) the love and expertise of the locals, their devotion to the plant both out in the fields and in the mills.
<{BR> At the turn of the century, red pepper seedlings were cultivated in almost every garden, the seeds were carefully selected by women on winter evenings. The most beautiful and healthiest pods were processed separately in order to obtain the seeds. After planting, the plants had to be hoed continuously during the summer. As only the ripe pods could be harvested, the harvest had to be repeated about 3-4 times. At home, the stalk of the already dried pod was pricked with a needle, strung on a yarn and hungout on the sunny side of the house for after ripening. The so-called sunray-ornamented' houses decorated with red pepper strings became a particular feature of Szeged and its neighbour- ing villages throughout the centuries. The red pepper strings dried up on the walls of the houses, and in this way the harmoruous taste and aroma so characteristic of the Szeged paprika developed. Grinding was preceded by the removal of the stalk and the seeds, what remained was the shiny, deep red pericarp.

Grinding was done with stones carved out of quarry stone, and this process is still used in paprika-mills. The company received the ISO 9002 qualityassurance certificate in 1994. Though the paprika market already disappeared from the main square of the town, the paprika powder of Szeged is available in airtight packaging in every shop.