Museum tickets, service costs:
The permanent exhibition representing the works of fashion designer Mária Hamza. 51 sketches display the various tendencies and their models from 1948 to 1960. (We keep about 600 sketches in the museum.) 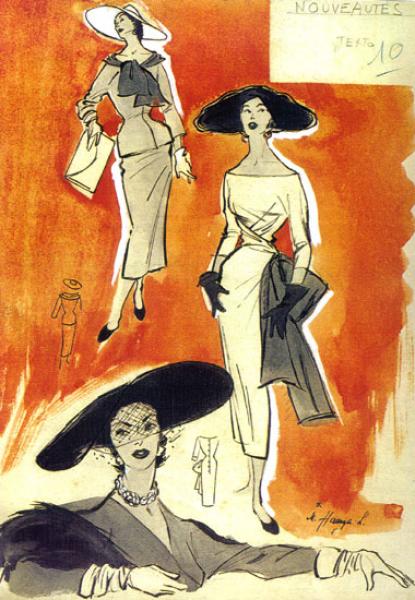 Mária Hamza was born in Budapest. Her parents were recognized artists (painters) of the times.

Mária Hamza moved to Paris with his family in 1924. Her sketches were published in French papers. She got married to Dezső Ákos Hamza, with whom he returned to Hungary in 1935. He was working for several cinematic periodicals.

From 1946 she studied in Paris, later in Rome, then from 1953 she persued her studies in Brasil. Her sketches were published in such papers as the „Diario di Sao Paulo" and the „Correrio Paulistan". She had connections with the most famous European fashion companies, such as Cristian Dior, Coco Chanel, Pierre Carden and Nina Ricci.

As a journalist she took part in the biggest fashion shows. In the South American Hungarian News she started a column written for ladies. Her werk were published b ythe Hamza Museum Foundation in 1997.