Museum tickets, service costs:
The Baroque furniture of the Black Eagle Pharmacy at Székesfehérvár was made by the Jesuit woodcarving workshop in 1758. They, however, had run a pharmacy even before. We can find the name of Johannes Maschner apothecarius in the list of the order members. In 1748 he was followed by Matyas Hill who remained the leader of the pharmacy also after the suppressing of the Order of Jesuits in 1773. The furniture of the pharmacy had been put up for sale before the Pauline friars moved into the monastery in 1776. Ferenc Walter, the first secular owner, had the extremely beautiful furniture carried onto its presentday place on the other side of the street. 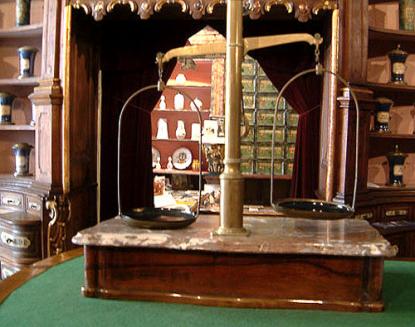 The Black Eagle Pharmacy of Székesfehérvár worked in its original function the longest time among the old 18th century ones. It was closed in 1971. The furniture, become worn out during the last two centuries, was restored by the experts of the Art Building Company.

In the 17th-18th centuries the orders in Hungary had the furniture of their churches and monasteries made by mostly their own joiners and wood-carvers. Bernat Baumgartner (1701-after 1773) was the head of the lay brothers working in the Jesuit workshop and was permanently staying at Székesfehérvár from 1749 to 1760. His name is connected with the planning and carving of the joinery and sculptural works of the altars (1750-1758), the pews (1760) and the furniture of the refectory facing the courtyard (1759), but sorry the latter was missing even in the 18th century. Bernat Baumgartner by his activity at Székesfehérvár is an outstanding master among the wood-carvers of his age.

One part of the equipment is the same age as the original furniture. The Jesuits made also the really fine medicine-press and its copper mortar and probably the nicely painted wooden jars. Since 1774 the secular owners gradually have changed and completed the jars.

The jars decorated with the eagle motif date back to this period. Instead of the original Baroque tare table now we can see a horseshoe-table of Empire style from the first part of the l9th century.