Museum tickets, service costs:
The coronation mantle was to begin with a bell-shaped, closed chasuble which was later turned into a mantle. According to the embroidered inscription, the chasuble was ordered for, and donated to, the Church of St. Mary in Székesfehérvár by King Stephen and Queen Gisella in 1031. 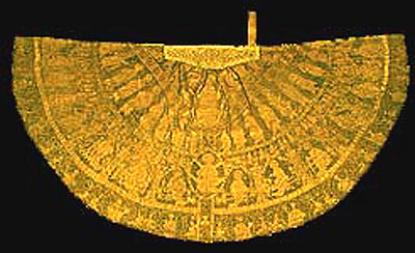 The chasuble is made of Byzantine rosette patterned silk, and is almost entirely covered with embroidery in golden thread. The back is ornamented with a cross, the arms of which branch upwards. Portraits of angels are embroidered along arms. On the vertical part of the Cross Christ is depicted twice in mandorlas. In the upper picture Christ, who has conquered death, is treading on the asp and basilisk, while in the other he has come enthroned to conduct the Last Judgement. The rest of the decoration is organised into sections. In the upper field below the branching arms of the Cross are the Old Testament Prophets; in the fields below them the Apostles are sitting enthroned beneath ornate arcades.

The fields containing the Prophets and the Apostles are separated by a thin band bearing an inscription referring to the above. In the outermost fields are depictions of the early martyrs of the Church on medallions separated from each other by birds. Among the martyrs and on either side of the base of the Cross are pictures of the royal donors: King Stephen is portrayed wearing a crown decorated with precious stones; he has a lance in his right hand and the orb in his left. Gizella is shown presenting a tower-shaped reliquary. Between them, on the Cross itself, is a portrait, in a small frame, of a youth. This is probably the royal couple's son, Imre.

The chasuble underwent alteration probably around the turn of the twelfth and thirteenth centuries.

This was the period when the sleeveless, long, bell-shaped chasuble came into fashion. At around this time a neck-piece was added to the mantle which was made of Byzantine silk embroidered with golden thread. The animal figures and arcading were decorated with pearls. The neck-piece, like the mantle itself, was originally one of the vestments worn by a member of the Church, and was embroidered in the twelfth century.

The first document in which the chasuble is mentioned refers to the coronation ceremony of Andrew III, and reveals that "the king was wearing clothes which used to belong to St. Stephen.