Museum tickets, service costs:
The exhibition opened in 1988 honors the Hungarian scientists who took part in the researches in connection with Hungary beside the scientific discoveries of our country. The material of the show does not only come from the present area of Hungary since our past is connected to the whole Carpathian Basin. 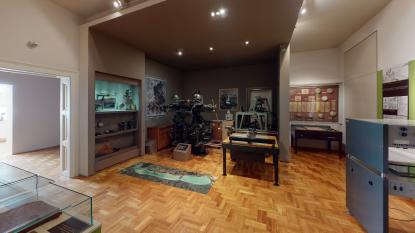 The main furnishing of the 'Cholnoky-Room' are from the study of the scientist. Jenő Cholnoky, the scientist, writer, and painter, hosts his tutor, Lajos Lóczy who was the researcher of the Lake Balaton symbolically besides two of his students Pál teleki and Gyula Pricz.

In the largest ward, the most important representatives of the Hungarian cartography are shown. The first detailed map of Hungary, the work of the student Lázár, made in 1528 is shown here. It was not properly placed in its frame and it deters from the proper north-south line by 45-50 degrees. This mistake was not recognized for a long time and this work was the source of several wrong maps.

In the ward of the cartographers, many old and new equipments of land survey are displayed besides the apparatus, which was made to evaluate the photos taken from the air.

The visitors may also learn of the results of the most important scientific researches of Érd and its surroundings. The Hungarian quarry of the Neanderthal people is also here.

In the last ward the work of the scientists of geography, ethnography of Transylvania, Moldva, and Bukovina, the discovery of the 'underground Hungary', the caves and karst waters of our country is summarized.