Museum tickets, service costs:
The horn, which may be found in the museum of Jászberény, is one of the most important treasures of the Hungarian nation, since one of the most beautiful heroic legends is related to this relic, namely the Lehel - legend: 'Back in 955, during the reign of Conrad I, the Hungarians ravaged all through Germany. But reaching the city of Augsburg they found themselves against great resistance. On the fields of Lech, near Augsburg the Germans seemed to become equal opponents and killed some of the Hungarians with great cruelty. This how the two leaders, Lehel and Bulcsú got captured, who were immediately taken before the emperor. The emperor said: Choose any manner of death. Lehel replied: Bring me my horn, first I will blow it, then I will answer. They brought him the horn, but before blowing it he stepped closer to the emperor and striked him on the head so hard that he died immediately. Then Lehel said the following: You have gone before me to become my slave in the other world. The ancient Hungarians believed that whoever they kill during their lives becomes their slave in the other world. 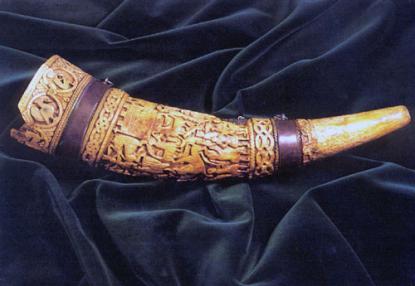 The Lehel-legend was made up gradually. Certain elements appear in Anonymus' writings. The earliest full version can be found in the Vienna Illustrated Chronicle (Bécsi Képes Krónika), 1358. The initial of the Chronicle illustrates the Lehel legend with a long mountaincliff horn. The conclusion then is that the illustrator could not have known about the horn in Jászberény, or it is possible that the legend was not linked to this horn in the 15 th century. According to scientific research data, Lehel's dignified symbol was, actually, the horn, but there is no clear evidence whether it was the horn of Jászberény.

Our present knowledge suggests that the horn was made in Byzantium around the 10th - 11th century. The richly ornamented ivory horn was originally used during Byzantine circuses. The artistic valne of the sophisticated carve work on the surface supports this fact. Under what conditions or how the horn got to Jászberény we do not know for sure.

The earliest illustration of the horn is found on the seal of the Jászberény Reform Parish (Jászberényi Református Egyházközség) 1642. During the Turkish occupation the illustration of the horn became the main symbol on the crests of Jászberény, the Jazygian-Cumanian District, and on the crests and seals of the Jazygian villages. The Jazygian captain wore the horn as a symbol of power on his belt during celebrations. They used it as a drinking horn as well, and on special occasions they even sounded it. The horn carried the name, Yazygian horn (Jász-kürt) at the beginning of the 18thcentury, but later on the Lehel's horn (Lehel-kürtje ) expression became more frequent.