Museum tickets, service costs:
The furnished jurta (the tent of the original settlers), the male and female figures dressed in folk clothes, as well as the harnessed horse was made for the 1000th anniversary of the Original Settlement. The exhibition is accompanied with maps and colored photos. 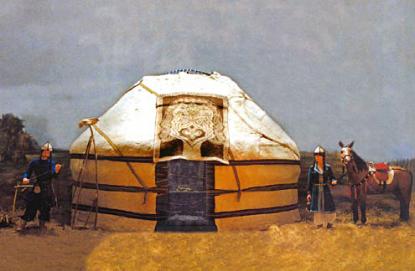 The history of Hungarians and other ethnic groups, Serbs, Romanians, Slovakians and Germans, living in symbiosis in Békés County began in 1715 when the reorganization of the county took place. In the second half of the 17th century, the county became unpopulated due to fights in the region. The lord Harruckern János György organized the settling of people to make the territory valuable again.

Slovakians from Upper Hungary, Transdanubia, peasants from the Trans Tiszanian area, Romanians and Serbs from Transylvania and the South, as well as Germans arrived from the Reins area to work in the fields again.

This is the process, the development of the County with variable ethnic population along with traditions, we show at our exhibition