Museum tickets, service costs:
The exhibition, which was opened by Árpád Göncz Prime Minister, begins with a short review of the history of Komló. We learn how a village of 10 houses developed into a little incorporated town by 1947, and a town by 1951. The exhibition shows the history of the town from several points of views. 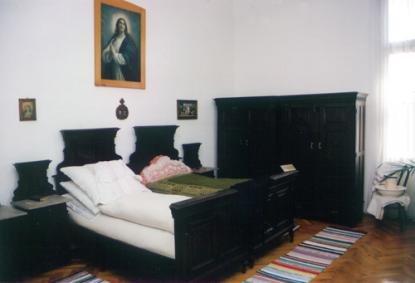 The first ward shows the memories the Romans left behind: agricultural objects, relics, and the Roman mansions in and around Komló.

Next the written and material objects are displayed. The name 'Komló' is first mentioned in a charter from 1256. The village was occupied by the Turkish in 1543. After the Turkish left there were only two houses standing in the village.
There is several interesting material in Komló: One of the rarities of the museum is the Werbőczy-Code published in 1743.

In the ethnographic ward of the museum household equipments, furniture and other accessories from the end of the 10th century to the end of the 20th century create the atmosphere of the beginning of the century. In another room the furnishing of a barberry and a shoemaker shop are displayed.

The history of local education is also presented: the furnishing of the primary school that functioned between the WWs, old school reports and other documents in connection with education can also be seen.

It is interesting to note that there was a system of education in Baranya County in the early Middle Ages, which ceased to exist under the Turkish reign. At the end of the 18th century education began again in Komló: the children were taught by the sexton.

The modern coal mining in Komló was established by Adolf Engel in the last decade of the 19th century. The settlement started to develop fast after mining began, roads were built and rebuilt, the industrial railway was opened, and a pharmacy was founded. Later the church was also built. The Pécs-Komló bus line started in 1934. Electric lighting also was established.

In the last ward the documents from nowadays, and objects from the two sister towns of Komló: the French Eragny-sur-Oiseo and the German Neckartenzlingen can be seen.