Museum tickets, service costs:
The first permanent exhibition of the Treasury of the Primacy opened on 19, August, 1988, on occasion of the 950th anniversary of the death of St. Stephen. The exhibition was opened by Dr. László Dankó, archbishop of Kalocsa by the following words: 'The 2nd Synod of the Vatican teaches the following in its disposal on Liturgy: Our good mother, the church has always been a patron of fine arts, especially, when it aimed at the objects of liturgy being ornamented, worthy, and true representatives of the transcendental. The church pays special attention to keep the saint tools worthy and nice to raise the honor of the ceremonies. But it always let changes happen in the material, ornamentation, and the form as well when, the techniques in the art or the taste of the period required. The artworks collected through the centuries were always in the best hands.' 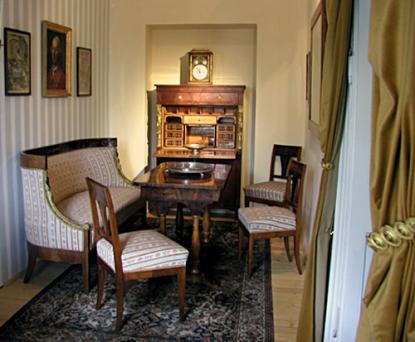 The collection was located in the old ward of the archives on the second floor of the Cathedral. This was a 50 m2 ward, but since the number of the visitors became higher and higher this large ward seemed to be too small. As part of the celebrations of 2002 when the foundation of the County was celebrated the Treasury moved to the house of István Katona (1732-1811), historian. This house where the new permanent exhibition was organized was three times larger than the former area.

The renewed collection which opened on 15, May, 2002 gives an insight into the history of the Primacy of Kalocsa besides introducing the artworks of the ecclesiastical art.