Museum tickets, service costs:
In some peasant communities woven wool rugs were major items in a woman’s trousseau. They were spread on the beds for display in the front room, used as table covers, served to emphasise the solemnity of an occasion and placed as a background for family photos. In the last third of the 19th century, together with other creations of folk art, scholars and politicians became aware of woven rugs, discovering their aesthetic value and also seeing in them the possibility for integrating peasant work and women's work. 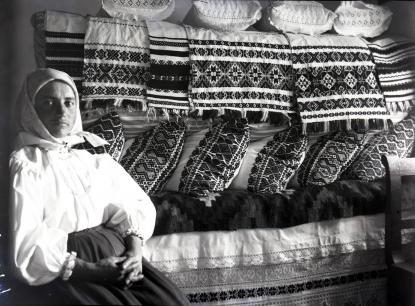 The exhibition in the Museum of Ethnography, part of the Uplifting Century national series of programmes, presents rugs made in peasant households in the light of and together with the efforts made in the late 19th century to promote home industry. Throughout Europe measures were taken to promote home industry as a way of helping women to earn an income from their handwork and rise out of poverty (training workshops were set up, courses launched, weaving looms allocated, pattern sheets distributed, exhibitions and bazaars organised).

The exhibition shows the efforts for integration that were made throughout the Austro-Hungarian Monarchy in its multiethnic richness: besides Romanian hand-woven rugs from Maramures, Serbian, Romanian, Croatian and Bulgarian rugs from the Banat and Vojvodina, there are also woven rugs 'festékes' of the Székelys from Transylvania and Bukovina, illustrating the great variety of these objects, their technical and functional similarities and differences.

The exhibition, selected from the rich collection of the Museum of Ethnography, presents the material heritage of the 19th century but also shows the process of collecting this heritage and the new approaches and applications, ending with objects made by applied artist Ildikó Ardai.

It traces processes in the history of society and of industry basically related to women, touching on the changing roles of women from the 19th century and the attempts to integrate women’s work into the economy. The majority of the objects on display were made by women.

The visual designer and the curators of the exhibition are also women, and today's women are an important target public. The exhibition is especially attractive for them if they are interested in women's fates, objects and histories.

At the same time the exhibition will also attract those with an interest in 19th Hungarian history: they will find important new research results in the presentation of home industry measures, local initiatives and exhibitions held in the 19th century. The exhibition basically aims to link ethnographical objects and historical processes.

Many people have a special interest in hand-made objects and natural materials. Many women weave as individual creators or in school or hobby circles. They will find important documents at the exhibition, see something of the historical background, get to know the different rugs, the ways in which they were originally made and the purposes for which they were intended. The original objects can also give them inspiration for their handwork. Many people will be interested in these aspects: weaving 'festékes' is part of the training given in many hobby circles and secondary schools specialising in crafts. The exhibition is also aimed at people interested in woven rugs in the wider sense.