Museum tickets, service costs:
220 new items were acquired by the Intersica Museum in 1974 from the library of the count Győry family of Perkáta. Most of the books, periodicals, music sheets are from the 18-19th century. 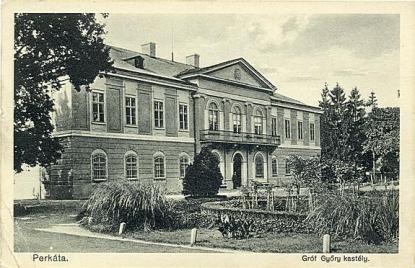 Ferenc Győry began his career as the assistant notary for Tolna County, then he was a draftsman at the Royal Court committee, the secretary of the local committee and later advisor to the same body. He fulfilled increasingly more important positions. His education and creativity is well explained by the manuscripts he wrote during his life on the public scene.

The estate in Perkata was inherited by his son, Ferenc Győry (1774-1839) who was known for his love of theatre. He was first the lord lieutenant of Tolna, then of Bács-Bodrog County.

His daughter, Terézia (1843-1936) did not get married. She stayed in Perkáta and managed part of the estate. After her death, the part she owned of the estate was inherited by the granddaughter of her sister who owned it until the land reform in 1945.

Paper restorers for the Intersica Museum performed the restoration works financed by the national Cultural Fund. In 2009 and 2010 they restored 8 books.

One of the most important intentions of the museum was to show items that had been preserved in the museum storehouse and had never been shown before. Our showing of the compilation set from the count's library is to demonstrate the quality work the restorers performed.

A separate chapter deals with the process of book restoration in relation with we organize arts and crafts activities for school groups. The students can learn about binding and paper marbling.