Museum tickets, service costs:
The Budapest exhibition, which could previously be seen in the exhibition halls of the Pierre Gianadda Foundation in Martigny, Switzerland, does not merely seek to present a picture of the development and most important trends in modern French painting but also to pay tribute to two outstanding Russian collectors active at the turn of the nineteenth and twentieth centuries, Ivan Morozov and Sergei Shchukin. The bulk of the masterpieces in the present Budapest exhibition originate from the extraordinarily rich, internationally acclaimed collections of these two wealthy Russian textile manufacturers. 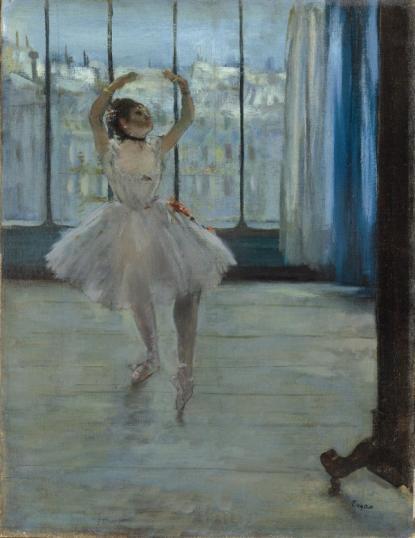 The fifty-five works selected from the Pushkin Museum's collection provide a chronological overview of the most dynamic period in French art. The greater part of the works by the pre-eminent artists that represent trends spanning six decades, from the mid-nineteenth century to the early twentieth, are well known from art albums. The eight separate chapters of the exhibition present this exciting period of art history through masterpieces of remarkable significance: Degas' Dancer at the Photographer's, Mount Sainte-Victoire - one of the early pieces from a series painted by Paul Cézanne -, Monet's Bridge over a Pond of Water Lilies, Renoir's In the Garden, Matamoe - one of Gauguin's canvases painted in Tahiti, In the Prison Courtyard - a painting by Van Gogh with a surprising theme -, Nasturtiums with the Painting "Dance" by Matisse, and Picasso's Acrobat and Young Harlequin. The sections titled Realism, The Barbizon School, Impressionism, Cézanne, Founders of Modernism, Symbolism, The Fauves, and The Start of the Avant-garde provide the systematic framework for the displayed works.

Numerous examples serve to demonstrate what a definitive role art collectors and art dealers played in the process of art's universal renaissance, ensuring a livelihood for pioneering artists who were neither understood nor accepted by the public opinion of the time, and bringing them publicity and recognition. Mutually reinforcing each other's activities in the late-nineteenth century, the new bourgeois art dealer emerged simultaneously with the first great reformers who created a great stir on the Parisian art scene at the time. It was not only the French art dealers who were witness to the changes, as foreign patrons of the arts also actively contributed to the international proliferation of the developments they encountered in Paris. Alongside the Americans, Russian art collectors were the first to undertake the task of introducing the works of the Impressionists and later those of experimental artists to an international audience.

Ivan Morozov and Sergei Shchukin belonged to the new generation of nineteenth-century art collectors, which owed their fortunes to their own endeavours and the prosperity that followed the industrial boom rather than to their family background. They devoted most of the income - which they derived from their legendary business acumen and special intuition - to purchasing new French works of fine art little known at the time. Of the two businessmen, Morozov was the more cautious and in his purchases focussed equally on each of the new trends (Impressionists, the Fauves, the Nabis). The paintings in the exhibition by Renoir, Degas, Cézanne and Denis came from his collection. The more daring of the two men, Shchukin, was obsessed with the works of Monet, Gauguin, Picasso, but he did not restrict his passionate collecting to works by these artists. He formed a lasting relationship with Matisse, who painted one of the most outstanding pieces in the exhibition, Nasturtiums with the Painting "Dance", on a commission from Shchukin.

The two collectors from Moscow not only purchased works of art with their exquisite taste but also threw open their palaces housing their collections to young art enthusiasts who were thus given the opportunity to see the works of French painters before they became generally known. These Russian collectors could well be mentioned alongside Paul Mellon or Solomon Guggenheim, had history not intervened: Russian private property was nationalised in 1917 after the Bolsheviks seized power, and prompted Shchukin and Morozov to leave Russia. By the end of the 1920s these nationalised paintings had been placed in the State Museum of Modern Western Art. Following World War II, on the basis of a decision made by Stalin, they were hidden away in the vaults of the Pushkin Museum and the Hermitage, where they languished until the 1060s, when they were again displayed to the public. An exhibition of works selected from the material of the Pushkin Museum was staged in Budapest in 1978, but the majority of the masterpieces in the present show have not yet been displayed in Hungary.