Museum tickets, service costs:
Opening on 24 June at the Museum of Fine Arts, "Heritage of the Holy Land" presents a selection of fifty treasures from the encyclopaedic collections of the Israel Museum in Jerusalem. The works of art displayed embrace a period of 9,000 years and include such highlights as a section of the Dead Sea Scrolls and masterpieces by Rembrandt and Rodin. The exhibition which is organized by the Israel Museum, is on view through the beginning of September. 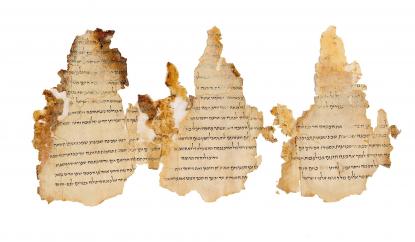 The masterpieces on display in Budapest originate from diverse historical periods and cultures and represent many artistic genres. The aim of the exhibition is to provide the visiting public with a picture of this cultural diversity, which nonetheless also reveals important points of connection and resonance. Interpretations of sacred and spiritual across this range of artistic manifestations provide the organising principle that lends unity to the exhibition.

The oldest object in the exhibition, which dates back to the 7th millennium BCE, is a Neolithic mask made of limestone. This rare find was discovered in the Judean Desert and is among the earliest known masks, probably used during religious rituals and magical rites. Also on view are painted anthropoid terracotta coffins, dating from the 13th century BCE, which were discovered in archaeological digs on the coastal plane and demonstrate Egyptian influence on ancient Israeli culture.

The exhibition's most significant and perhaps most fascinating artefact is a section of the 2,000-year-old Dead Sea Scrolls. The first scroll fragments were found in 1947 by Bedouin shepherds in 1947 near Khirbet Qumran on the northwest shore of the Dead Sea. The scrolls are regarded as one of the most important archaeological finds of the 20th century and include Biblical texts, Apocryphal works, and Sectarian writings. The longest fragment included among the scrolls on display at the exhibition is a 40cm-long section of the so-called Temple Scroll, which is a detailed vision of the ideal Temple.

Other works on display include a gilded Koran of 550 silk-paper sheets dating from the 17th century, and devotional objects linked to the Torah (a mantle, Torah pointer, breastplate, and Torah crown). There are numerous other implements pertaining to Jewish religious rites, such as a sanctifying cup, a prayer book and a collection of spice boxes gathered together from various European countries. These forty decorated spice boxes of different shapes and designs were used in the Havdalah rituals held to mark the passing of the Sabbath. There are also rare objects relating to Christian culture, such as the negative and positive images of a photograph taken by Secondo Pia of the Shroud of Turin in 1898.

The Israel Museum's fine art holdings are represented by such masterpieces as Rembrandt's painting executed in 1631, titled St. Peter in Prison. The painting is based on the Acts of the Apostles of the New Testament and depicts Peter the Apostle in his prison cell in Jerusalem after his arrest by Herod's soldiers. Other important works are Nicolas Poussin's The Destruction of the Temple in Jerusalem, Turner's watercolors of Jerusalem, Chagall's painting The Rabbi, and Rodin’s bronze sculpture of Iris, Messenger of the Gods.

The Budapest exhibition also provides a rich selection from the Israel Museum's modern and contemporary collections. Of special note are works on display by Rothko, Serrano, Richter, Anthony Gormley, and Yoko Ono, as well as Mark Wallinger's Ecce Homo, a sculpture depicting Jesus which was first erected in Trafalgar Square in London in 1999.