Museum tickets, service costs:
The Munkácsy trilogy has been shown since 25, August 1995 in the Déri Museum. Our present exhibition wishes to honor Pákh Imre, the owner of the painting titled 'Golgotha', for expanding the deadline of its deposit. 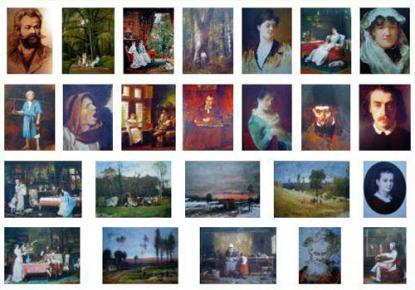 With organizing the exhibition in Debrecen, Pákh Imre, the collector of Munkácsy works, intended to show the paintings in and around the town. Thus, the Hungarians living outside of the border would have a chance to see them too.

The collection includes works of all the important periods of Munkácsy. The outlines of the 'Yawning Boy' (1869-1870), the 'Pawnshop', the 'Old Woman with Notepad' and the actual ’Bohemian' are shown.

Many figurative landscapes include like the 'Washerwoman', the 'Gypsies' and works influenced by the time he spent in Barbizon. His favored salon pictures will be probably of special interest. The compositions catching the atmosphere of the family like the 'Two Families' and the 'Birthday of the Father' are shown. He painted females with children in his studio as well as plein air. An example of that is the 'Walk in Park Monceaux'.

The portraits of the daughter of Munkácsy Emil, Madame Chaplin and an unknown man are examples of his treatment of characters. His sensitivity to describe psychological features is also visible on pictures like the 'Bust of Christ', 'Screaming Boy'.

The selection titled 'Munkácsy - Pictures from America - Selection from the collection of Pákh Imre' is shown in the Zoltai Lajos and the Munkácsy wards. The paintings are ordered thematically.

The exhibition opens with the draft of the 'Yawning Boy' followed by the portraits, the landscapes and at the end the salon pictures. The display ends with the Christ pictures in the Zoltai Lajos Ward. The next location is the Munkácsy Ward with the Christ Trilogy and the drafts to them along with the 'Said Outlaw' and the 'Portrait of Mrs. Reök Iván.