Museum tickets, service costs:
Following the Austro-Hungarian Compromise of 1867, the extensive economical, industrial and cultural development taking place proved that the formerly active coops did not function according to the requirements of the times. The Act 17 of 1884 accordingly required qualification to practice trade. It also organized trade authorities, ordering the formation of trade associations on the territory of every trade authority to which every tradesman was obliged to join. 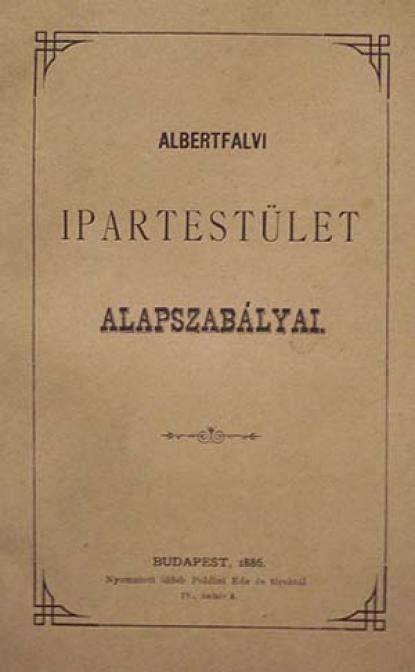 Tradesmen in Albertfalva formed their own trade association in 1886, the same year when Promontor was renamed Budafok. The Budafok Trade Association only formed two years later, in 1888. The significance of carpentry in the village is shown in the saying 'A joiner must go to Albertfalva first if he wants to go and work in Europe.

The members of the Albertfalva Trade Association were mostly joiners when it celebrated its 50 anniversary. Their main products were sofas, chairs and tables. After the pieces were ready, they were moved to the storehouse in Újpest where the individual pieces were assembled into sets to be shown to costumers as complete furnishing. The applied art quality furniture were known across and outside the Monarchy, some were even purchased overseas. This is how an armchair and two foot-stools were made for the President of the USA, the second one is now displayed in our museum.

The chest of the Albertfalva Carpenter Guild is a masterpiece. It was made in the studio of József Strobl in 1852. The prizes and appreciations the carpenters of Albertfalva received made them renowned nationwide.

One of the carpenter families were the Mahunka family. Alajos Mahunka was the first president of the Trade Association founded in 1886. A street was named in Albertfalva after the furniture factory owner Imre Mahunka. Many of the house number plates in Sáfrány Street still read 'Mahunka Imre Utca'. At the moment a small square not far from the museum has his name. The memorial room of Imre Mahunka opened in September 2009 in the museum, with suites of furniture from his factory on display.