Museum tickets, service costs:
The graphic artist and painter Illéssy Péter was born in Gyoma on 25 June 1902. He went to primary school in Gyoma and to grammar school in Szarvas. His interest in art showed at an early age. After graduating from grammar school, he enrolled Fine Arts Collage. His favourite teacher was Rudnay Gyula. His favourite topic were Hungarian history, folk life, Catholic religion and family life. 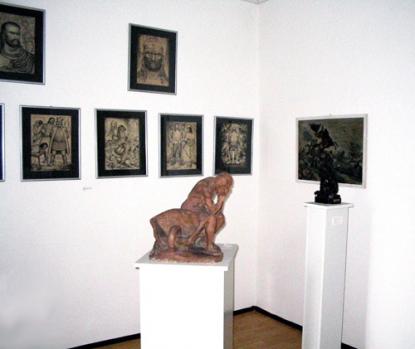 He was an active member of the people's collage movement. He became the arts manager of the People's Collage of Érd, the KALOT in 1940. He was among those who initiated the renewal of the people's collage system after the war. He was ignored after 1949 sine he was declared clerical reactionist. The reason of this was his role in the KALOT, his activity in ecclesiastic art and his opposition to "determined art".

He was not commissioned and had to support his family by taking on char. He died at a young age on 5 June 1962.