Museum tickets, service costs:
The Bleaks of Dévaványa-Ecseg are the largest unit of the Körös-Maros National Park founded on 16, January 1997. First it was declared protected area under the name Dévaványai Landscape-Protection Area. The 13085 hectares are made up of eight independent areas. 2659 hectares of it are highly protected. The area is separated into two significant parts: the flood area of Hortobágy-Berettyó and the other is the bleaks south and east to it. 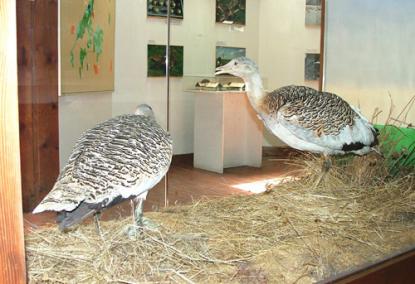 The 20-kilometer reach of the river Hortobágy-Berettyó escaped the regulation of river ways of the past century. The slowly meandering river follows along huge curves surrounding significant meadows. The tourists may see several species of birds. The appearance of otters is significant. Several of the protected plants can also be found in the vacuole of the Hortobágy-Berettyó.

Two third of the area are bleaks holding characteristic and rare plants and birds.

The bustards of the region protected by the Reservoir of Bustards founded in 1975 are of significant interest. The National Park mainly focuses of the open-air protection of the birds. The bustard raising plant is only open for the endangered birds. The eggs are placed in the incubator of the Bustard Plant but the young birds are returned to nature.