Creations prepared by the painter Előd Nagy, which present construction phases of the Paks Nuclear Power Plant, are in the Visitor's Centre of the Plant. 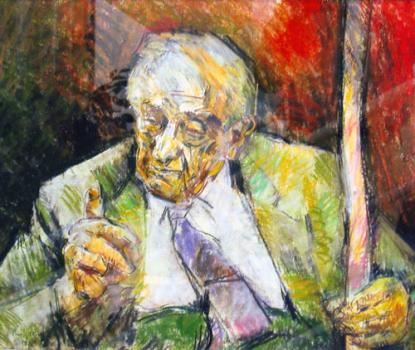 In response to the invitation on the part of the Governmental Commissioner Benjamin Szabó, Előd Nagy first visited the construction site of the Paks Nuclear Power Plant in autumn of 1979, then, since 1981, he has a contractual relationship with the Paks NPP.

Beyond the construction, also the surrounding villageous landscape is presented on his pictures. His creations presenting Paks and its surround were presented at first in the Trade-Unions' Capital Cultural Centre. His independent exhibition at Paks was opened in 1982, then 1986. These exhibitions were followed by numerous ones, and his pictures about Paks were presented at almost all of them (for example, Újpest Gallery 1987, Porsche Hungária Car Saloon 1993). In response to the invitation of the ÉDÁSZ (North Trans-Danubian Electricity Supply Company), he had an exhibition of significant collection of nuclear power plant pictures in February of the last year in the National Theatre of Győr. His two nuclear power plant pastels can be currently viewed at two independent exhibitions (Oberwart-Felsőőr, Oberpullendorf-Felsőpulya).

In the form of a calendar for the years of 1986 and 1987, a selection from his drawings was issued by Paks Nuclear Power Plant, Inc. and OVIT, Inc. (National Overhead Transmission Line Company). Also some pieces of his coin artist works are attached to his activity in Paks: the Ányos Jedlik-Prize of the Hungarian Electric Stations Trust, as well as the Sándor Csenterics-Prize and the Vegyépszer-Prize.