Museum tickets, service costs:
Walking through the halls named after the periods exhibited within them, one can get acquainted, in chronological order, first with the terror of the Hungarian nazi and then the communist regime. 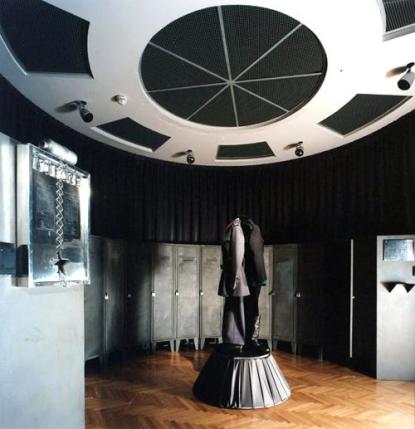 The exhibition entitled Double Occupation presents Hungary's two subsequent occupations. In one side of the room, Hungary can be seen under Nazi German occupation, in the other, under Soviet rule. After 1945, when Rákosi and the communists trained in Moscow returned home, the Hungarian Communist Party's membership was minimal, and so a number of the so-called small-time Arrow-cross people of the previous regime also had to be accepted in order to grow. The room also tries to present that all layers of society "changed their clothes" and entered into a new world.

This hall is aimed at presenting the roughest period of communism in Hungary. The monitors show excerpts from 50s news programmes. Placing the headphones on our heads, we can hear political speeches from major communist leaders of the era (Farkas, Révai, Gerő.) Behind the fancy curtains, we can find tapping devices from the time.

The Torture Chamber is the only room that was preserved in its original form. At the time, it was referred to as the gym. On the wall we can see special instruments of torture: rod with nails, lead-headed bamboo stick, Arrow-cross bamboo rod, stick covered in leather with a lead spring.

In the room of Gábor Péter the victims report on the interrogation methods of the ÁVH (State Security Authority) and we can also find out how the system gobbled up its own children.

The HALL OF THE 1956 REVOLUTION recalls the events of the 1956 revolution and raises a monument to the memory of the Hungarian heroes who fell in the course of the combats.

Hundreds of thousands of people left Hungary at the time of dictatorship. It is their postcards that cover the walls of this hall.

In the HALL OF TEARS we can read the names of those who were executed for political reasons between 1945 and 1967.

The FAREWELL room ends up the exhibition. Here we can see documentaries on the mass demonstrations of 1989 and the last Soviet troops leaving Hungary.