Museum tickets, service costs:
Iván Nagy genealogist historian founded the museum on 15th March 1891 in Balassagyarmat. The scientist gifted all his possessions to the altar of public affairs. He also donated his library of about 10 thousand volumes to the museum. 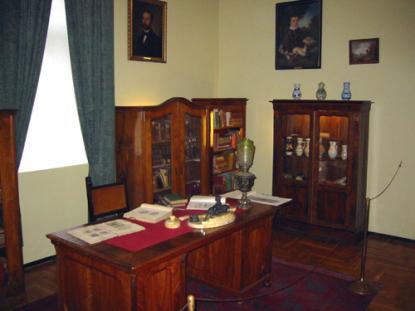 The old material of the Palóc Museum is protected and exhibited in the museum, whilst the library can also be used as a research center, equipped with multimedia and computerized capacities.

The library of Iván Nagy contains a number of codexes, incunabulas, early Hungarian and museologic books and manuscripts. The most valuable material of the library was shifted to the National Széchényi Library in 1949-1950. The exhibition represents a selection of this material.

The goal of the exhibition is to demonstrate the characteristics of the library, the life conditions of the museum founder and scientist, and the history of the Hungarian nation. The study room of Iván Nagy was faithfully arranged as an enteriour.

The career of Iván Nagy is represented in the following order: family inheritance, the time of preparation (school years), fighting in the war for independence and the days of hiding; his life as an educator and lawyer; the scientist historian in Pest; for the public in Nógrád; the library builder.

The history revealed by the library books is adjusted to the following stations: prehistoric life; Hungarian conquest; the time of the Árpádian kings; the Angevin-era, the time of the Turkish occupation and the 19th century, as the age of independence and embourgeoisement.