Museum tickets, service costs:
There are two types of windmills in Hungary: the one that is propelled on the upper part eventually replaced the one propelled on the lower part. In both cases the power of the wind is transformed by the sails into a swirling motion. 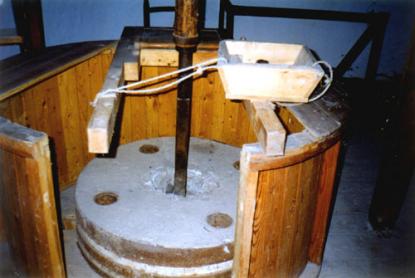 The mills had four stories. The sails were placed on the turntable roofs. The turning motion of the wind was transformed by the big drum and it span the fast wheel. The number of the little drums depended on how many stones, usually two or three, were used in the mill. The fork that reached over to the second floor was attached to the little drums. The stone bench stood on the second floor. The millstones worked in pairs here. The fork turned the upper stone.

The stones were shipped down the Tisza from Máramaros. After the stone-masons shaped the stones they were given over to the miller. When the surface became smooth the miller had to make it harsh again. This process could go on as long as the size and the weight of the stones were proper. The gullet was on the second floor, where the crop was poured on it. The sacks and the crop were pulled up by a simple recoiler.

The quality of the flour depended on the gap between the stones and the number of pouring of the crop on the gullet. The flour that was recovered from under the stone was a mixture of fine and row grain. These were separated by a strainer.

The miller had to be a very talented man since he had to be an expert in several trades. When the season of milling came, the mill had to work constantly to earn enough for the dead slack. Whenever something went wrong the miller had to repair it. He also had to be able to repair the millstones and own the proper equipment to do so.