Museum tickets, service costs:
The new permanent exhibition titled 'The Memories of Telecommunication of the Upper Balaton Area' is open in a peasant house that was declared national monument in 1925 and is situated in the place in front of the Kinizsi Castle. 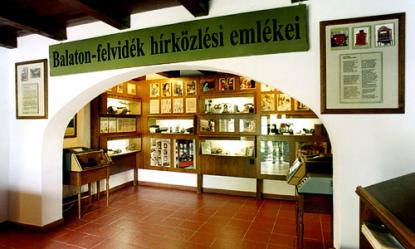 The room opening from the kitchen holds the documents and objects concerning the history of postal services of Nagyvázsony. The post history of the settlement goes back to the 18th century. We show a post box painted by the typical colors of the Habsburg family, the reconstruction of the post car uniforms and letters. The visitors may also see some typical tools and equipments such as seals, packages and weapons making the transportation of postal packages safe.

Over the telegraphs and teleprinters exhibited in the middle ward the chronology of the history of the telegraph can be read. The photos and objects on the walls illustrate the relationship of men and telephone.

The first pageant in the third ward describes the inventor of the telephone services: the brothers Puskás. Puskás Tivadar, the colleague of Edison, invented the switchboard. His brother, Puskás Ferenc created the first telephone net with hand 50 subscriber on 1, May 1881.

Over the switchboard LBIII/25, the reconstruction of a cable cupboard is displayed. The LB systems were followed by central battery centers where lamps signed an incoming call. The V/25 CB center shown is out of order. We also show a small size crossbar satellite exchange of the CPA 21 type that operated as the center of the Post Museum until 1991. This operates the appliances in the middle of the ward. The Mickey Mouse phone among them is the favorite of the children.

The development of the telephone is shown on photos in detail. The last pageant of the exhibition shows the life and work of the physicist from Austria, Robert von Lieben, who had relatives living in Nagyvázsony.

The CDs published by the Telecommunication Museum Foundation can be studied on the computers in the wards.