Museum tickets, service costs:
"Esztergom has spirit and culture: that is its tradition. (...) it was the town that provided both a home and rest for my work, a stimulating home and sweet rest." 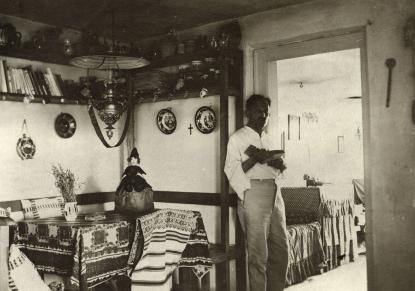 Mihály Babits (1883-1941), the outstanding classic figure in Hungarian literature, was a poet, writer, translator, literary historian, and a key figure of the first generation of the literary journal, Nyugat.

Babits was born in Szekszárd and maintained his aspirations for Transdanubia with a sense of nostalgia throughout his life. This may be a reason why the poet and his wife left behind the anxieties and the stirring life of the city and looked for a place in the country for recreation and recupertion - if only over the sunny spring and summer months.

The couple visited Esztergom first, most probably, in August 1823. They fell in love with the place immediately. Babits also unexpectedly received a miraculously generous honorarium for his translation of Dante's Paradise, and due to the expertise of Dr. Zoltán Nagy, their lawyer friend, the couple's financial resources were doubled within a short time. Meanwhile, some other friends, also attached to Esztergom, Dezső Tipary, the graphic artist and Aurél Kárpáty, the art critic, kept their eyes open for property on sale in Esztergom until finally the right one, not far from the city centre, on top of Előhegy (Forehill) was spotted and bought by Babits and his wife on March 27th, 1924.

During the succeeding years they purchased some more land to extend the garden and continuously kept improving the place. Immediately after settling down in Esztergom they met some local families who were most helpful sorting out tiny little daily problems and, more importantly, received the newcomers with warm and sincere friendship. The Babits family lived there from early spring to late autumn but there was also a lively correspondence between them and the Olajos and Einczinger families in winter,. Ferenc Einczinger, the reliable bank officer, then manger of the Savings Bank, was also a talented artist, who took an active part in decorating the Babits house. His wall paintings and inscriptions appealed not only to the guests coming to visit Babits at that time but introduce the visitors of today to the magic of the spirit of the space. One of the most famous parts of the villa is the signature wall, which is a very special documentation of Hungarian literary history. It is the manifestation of a distant and long gone civilisation and old ideals. The signatures on the wall give the visitor a true picture of all the people who knew Babits. All visitors signed the wall, which, now, thanks to Ferenc Springer's restoration work, after decades of neglect, is clear and bright and we are able to recognise all the signatures.

Many letters went to and from Esztergom and Budapest as Babits continued to edit the Nyugat from Esztergom.In fact, Esztergom and the house became a theme for him, the place where he wrote much of his poetry and prose, and where he did his translations. It was where on August 17th, 1938 he read out The Book of Jonah to his wife, Sophie Török. Throughout his illness Babits longed after his little house on the top of the hill in Esztergom as it meant all the memories and moods of life and bygone happiness for him. "I'd rather stay here in Esztergom..." he was begging his wife. He worked until his last day. His manuscript of a Sophocles translation was collected from his bedside table by his friend Gyula Illyés.

After Babits's death in 1941 the house went through many changes to eventually become a literary memorial house in 1962.